The name of the guilty has not been changed in this post but I have protected the names of the innocent.

In my younger days, I was heavily involved in several fandoms. Most notably were Highlander, X-Files, and Hercules/Xena. There ended up being so much drama around them, I just distanced myself from it. Until a lovely little covert British military ops show entered my life.

The two main actors were not only easy on the eyes, but good actors, too. The show was well done from top to bottom. I had another friend who was involved in the fandom for the first actor. She helped run a Facebook pages, Twitter, and Instagram for them. At the time I joined, there were 3 other “admins” in addition her. One of the admins had managed to cultivate a friendly relationship with PW, though it consisted of mainly him following the group’s Twitter and some DMs back and forth, nothing too major.

With the number of admins we had, we each were supposed to take turns managing the social media accounts. Deb started out managing the Twitter account. And through managing that account, she developed a more solid relationship with PW. Now we thought it was for the benefit of the whole, but it wasn’t.

Myself, and the other 3 admins all had lives to live. We had jobs, families, school, etc. that took up most of our time, as it normal. Deb didn’t quite have all those restraints. She could hours and hours a day scouring the internet, looking for the tiniest of tidbits of information, and rewatching everything he was in to memorize the minutest of details.

She began to feel as if the Twitter account was hers. When, in fact, it had been around long before she had been invited to be an admin of the group. She was the last one invited before me. Other admins would post or cross post to the Twitter account and she would delete the posts.

Her, I, and a 3rd party, Kelsey, formed another group for the show as a whole. As the group grew and Deb’s “friendship” with PW solidified, I began to get an uneasy feeling about the PW group. Comments were made in chats with Kelsey that just didn’t sit right. I tried to gently warn the PW group admins about my gut feelings but we all tried to give Deb the benefit of the doubt. I told them I had a feeling she was going to try and hijack the PW Twitter account. But again, we tried to believe she had the whole’s interest in mind. Well… nope!

I don’t know what she told PW in private conversations. I have a feeling a lot of it was half-truths or outright lies. The day that I was boarding a plane to return from my trip to the UK, she sends a DM to our PW admin Twitter chat. You can click on the images to get the full size view in a new tab. Close the tab when you’re done to come back here. 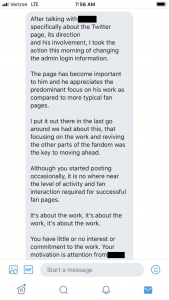 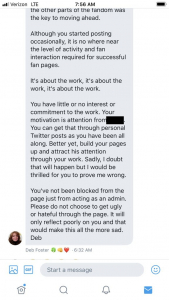 Basically, because everyone else had lives and couldn’t dedicate 8 hours a day to the page, we were not allowed to be a part of it any more, despite the fact she was not even the original creator of it. If it had been any tangible object, it would have been considered stealing.

There wasn’t much I could do flying over the Atlantic at 33K feet but thankfully the other admins were smarter than her, and in the middle of her live tweet of one of PW’s shows, they locked her out of the Twitter account.

Those messages were sent to PW, but we can’t be sure he saw them since she tried to delete them from the group’s DM chat with him before she was locked her out.

I still have doubts that it was done with PW’s blessing. I think she just said that, hence the “warning” that making anything of it would just make us look bad. Well… not really… not when we had your words backing up what a horrid thing you tried to do.

The other 4 of us were fans. Maintaining a social media presence for an actor was a hobby, not a job. But she wanted his attention all to herself, something she accused of (wanting his attention). It wasn’t that we had no interest, like she claimed. It was that we HAD LIVES. Unlike her. If he wanted someone to manage “official” social media accounts, then he should hire someone, not punish fans trying to help his career. In fact, his management company should be doing that, not a fan. But I still think she told him lies. What even remotely considerate person wouldn’t understand having families, lives, other obligations? Especially someone like him who is totally into family and such.

She ended up having to create a new Twitter account. And I still can’t help but wonder just what she told PW about it, how she explained it, what lies she told.

She even had the audacity to steal the interviews she did for our PW site for her own. I’m sure she happily helped herself to other stuff too. The saddest part, her selfishness ruined not only my enthusiasm for the actor, but for the the shows he was in, too.

Back in the day, I had access to one of the stars of The X-Files and ran a fan group for him. He would frequently call my house and ask about how things were. This was way before the age of Zoom and just as internet text chats were beginning. So, the fans would gather at conventions instead. This person would always hang out after the official end of the convention to chat with the fans in the group. I stood back and made sure every single person there had their time with him. If the convention organizers weren’t testy by then (and usually they were), I would talk with him. This is the total opposite of Deb’s attitude with PW. He was for her and only her unless you had hours upon hours to devote to her & her cause.

In the end, we took the high road. We said nothing publicly about what she did. We never even announced she was no longer a part of our admin team. We, as individuals, made reference to drama, but never really named names. I did once, in an IG story that he did see. However, he would have had to read the text of the story and I’m guessing he skips through them quickly because he gets tagged in a lot of them.

It was a harsh reminder, that, while fandom itself isn’t a bitch, certain people in it sure are.