It’s so close I can almost touch it, LOL! My laundry is almost done so I can pack my final clothes. Of course the weather is going to be all nice and sunny and 70’s here but cloudy and 50s in London. That wasn’t supposed to happen. It was supposed to be the other way around, dang it! Oh well, I have a hooded jacket and an umbrella 🙂 Birthday dinner is all set. We’re dining at Swan, Shakespeare’s Globe. As the name says, it’s near Shakespeare’s Globe on the river Themes and has some nice view. 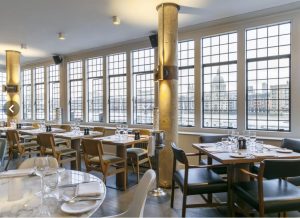 It’s not super fancy. which is good cause I won’t be bringing super fancy clothes, but it’s cute and looks at have a great dining atmosphere. It’s also on several lists of best places to dine with a view. The menu looks good and they have a mead bar 😀 Most places have a good selections of wines but I’m not a wine drinker. Mead makes a nice change up from my usual rum related drinks.

Once my laundry finishes up and that’s packed, I’ll head over to my brother’s to hang with him and my sister-in-law and have dinner again. Tonight’s it’s roast beef. Last night it was super yummy Irish Death BBQ ribs! That’s ribs boiled in Irish Death beer and then slathered in BBQ and grilled. Sooooo yummy! I’ll probably hit the store before I go so I can pick up some corn meal for corn bread. We were going to do it last night but sister-in-law realized she didn’t have corn meal. But that’s okay cause it’ll go good with pot roast.

I’m still waiting for my biology instruct to post my last grade. Well, the last half of my last grade. The forums are graded in two parts: your original post and then your replies to other people/replies to people who replied to you. Each part if work 50% of your grade. She listed the grade for my original post but nothing for replies yet so it’s showing as an F. That’s keeping me from getting an A instead of an A-. Yeah, it’s picky, an A is an A but A looks better on paper than A-. I sent her a message, not that she’ll respond and that’s been one of my big beefs with her. And it’ll be reflected when I get all my grades posted and do the end of class survey. I want to get that done before I leave for Rachel’s tomorrow. Guess we’ll see what happens.