We finally moved locations. This was supposed to happen in Feb because the admin location was just getting too crowded, a little too busy. There was a smaller, though not quite as posh space in another building that we were going to move to. But then, just like how most stories went this year… COVID.

The lack of PPE made it so every single thing had to tracked, accounted for, used sparingly. Not just here but everywhere. And there were even stories of privately acquired and paid for supplies of it getting snatched by the federal government instead of going to the people of the country. Many healthcare workers themselves caught COVID due to lack of proper protective equipment. So, the little space we were supposed to move to ended up being PPE storage. Finally, supply caught up (mostly) with demand. Though I’m still wondering why most of it comes from China. Do we not have places to make it here? That’s for another discussion though.

Everyone else moved out last week. I moved yesterday. I hadn’t even packed up my space and people were staking their claim: 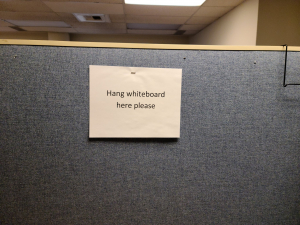 I mean gees…. the body isn’t even cold yet. A co-worker went back later that day to make sure all important stuff had been taken because people couldn’t wait until we cleared everything out before taking over. Oh well, whatever. I did finally get everything packed, said goodbye to the important people, and headed to the new digs.

It probably took me a couple of hours just to get unpacked and kind of settled. The hope was less physical interruptions so we could focus on work better. Yeah…. not so much, LOL! 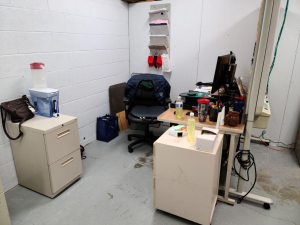 It’s not that much smaller than my old space. Waiting for my corkboard to be put on the back wall so I can hang things… most importantly my Seattle Seawolves flag! I have some of my Henry stuff on the board in front of me 😁 As soon as I get some push pins, I’ll hang more of it back up. And yes, there is a collection of masks hanging there. (#WearYourDamnMask) I cycle through 4 of them, washing the day before’s when I get there in the morning while my tea is steeping 😁

It’ll take awhile for everything to settle down and new routines to take hold. Good thing is being a little closer to home. Though not quite as convenient to the horse. That’s only a 2 day a week trip though. No more walking to Starbucks, the bank, or post office. Starbuck isn’t a bad thing. Don’t need a lot of that, LOL! There is a post office, kind of on the way home… just not the direct route. I miss not seeing the outside because we have no windows at all, especially to see what the weather is like. And if we lose power…. it will be VERY dark! (Mental note: make sure flashlight is close by. Mental note 2: Duh! You’re phone has a flashlight 🤦‍♀️)

It’s all only temporary, which is a very subjective word. The company has a plot of land they are building an administration center on which, we’ve been told, we will be the first to move into. Our building will be separate from the other, main building, once again to cut down on physical interruptions. They are in the blueprint approval phase for it. That will continue for awhile I’m sure. And who knows how long it will take to actually build. In the meantime, I will just try to make my new space as comfy as possible.