“Werewolf: the Beast Among Us” tells the tale of a group of werewolf hunters trying to track and kill an unusually large and powerful werewolf. Charles leads the motley crew. 25 years ago, a werewolf killed his parents. Now he has the reputation as the best hunter in the land, with 12 kills under his belt. This werewolf, however, might be his ultimate match.

The first time I watched this movie, I liked it. At the end of the second time that I watched it, while doing screencaps, I loved it. There is just so much right about this monster flick.

The filming was done in Romania. How much more monster can you get than that? Even more so when it’s actually filming in the birthplace of Vlad the Impaler, who’s the inspiration for Dracula. Major kudos for picking that location. The age of the towns and the untouched nature of the forests in Romania make the film very authentic to the time period.  Bethlen Castle, used for the old ruins where the werewolf had a lair and the final showdown, oozed creepy and haunted. What better place for a monster to hang out?

Lighting for the film was very good! A lot of films make the dark, well, too dark, thinking it adds scary to the film. But if it’s too dark to really see what’s going on, all it does is add frustration to the viewer. The shadows blended into the night instead of being overpowered by it. You could just catch the glimpse of something lurking around in the woods and not know where it darted off to.

The other often major failing of monster films, is the monster itself. There’s build to knowing something is out there, hunting and kill. The viewer gets a glimpse of a shadow, of a claw. They hear it growl. They have this vision of what it is playing in their mind. When the actual creature appears on film, it’s often a let down. The viewer’s imagination created something much worse. Either the costume is poorly done. Or the CGI comes off as too unreal and cheesy. But in this film, the costume and animatronics meshed wonderfully with the CGI for no disappointment when you get to see the werewolf.

I loved the horses they used! Especially the one (or ones) Ed Quinn’s character rode. I’m guessing it was a black Andalusian (or a cross thereof). My horse is 15.3 hands, and knowing how tall Ed Quinn is (6’4”), the horse would need to be close to 17 hands tall so it didn’t look like Ed was riding a pony. Gorgeous, gorgeous animal 🙂

The whole crew of actors were awesome! I had two favorites, aside from Charles.

Adam Croasdell played Stefan to smarmy perfection. He comes across as sort of charming, sort of suave, but there’s just that little bit of creepiness about him. He took great pleasure in throwing knives at Daniel (Guy Wilson) and hitting on Daniel’s girl, Eva (Rachel DiPillo). Stefan kept a secret though. He had certain skills that didn’t seem normal. Climbing a rope upside down. Suddenly appearing in Eva’s bedroom. All little tidbits that screamed “I’m not what you think I am.” The secret gets exposed during his fight with Daniel. He’s a vampire. Very cool twist, right there!

Ana Ularu rocked it as Kazia, the kick ass female archer who carried around a flame thrower. She didn’t take crap from anyone. That included throwing the B.S. flag at Hyde’s story of how he lost his eye. I think she was a little under used and would have liked to have seen more action for her.

And then there is Ed Quinn, the major reason why I watched this movie. He played Charles as a bit of a brooding cowboy, complete with hat and duster. Charming, quiet, and reserved but he knows his job and he knows he’s good at it. He’s not beyond being a smartass either. I’d bet Ed didn’t have to reach too far for that last one 😉 Charles isn’t a lady’s man though. You don’t find him with women draped over him at the local brothel that Stefan acquired as their lodgings. He appears much more comfortable with a shot or two of liquor, a weapon in hand, or atop a horse. He looks darn good doing all three, as well!

Over all fun, fun movie, true to the monster genre. Below are the untouched up (except for 1) screencaps from the movie. Well, let me rephrase that… screencaps of Ed from the movie. Yeah, well, when you’ve got hot and handsome to work with, you can get carried away 😀 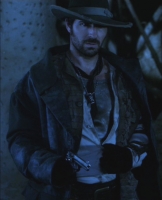 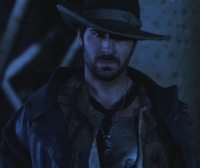 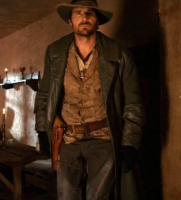 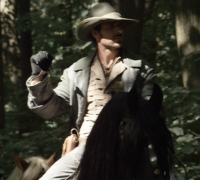 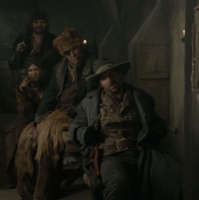 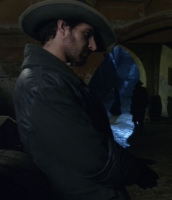 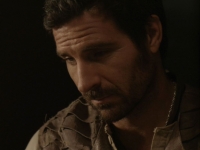 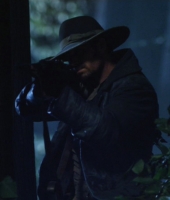 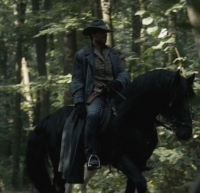 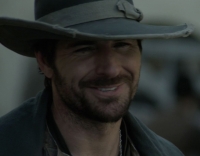 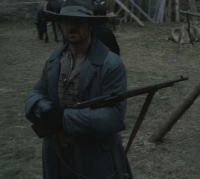 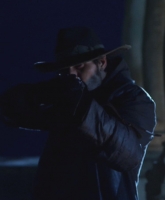 One thought on “Werewolf:The Beast Among Us – Review”