So when I last left off, Scott, Lesli, and I headed to their place around 3am Saturday morning to get some decent rest before having to be back on set around noon. Umm… yeah… that so was not what happened for me. After getting unpacked some and changing into my comfy sleep clothes, I pulled out my tablet to go over the scenes and dialogue a little more for the next day. I figured it’d be good to have it all bouncing around in my head while I slept. Around 4:30am, I hit the pillow and was OUT! Still wish I could have packed that bed home with me. It was soooo comfy!

At 6:45am my internal fucking alarm clock goes off and I am wide awake. BUT on a good note, I was much more calm. That’s not to say I wasn’t still nervous, I was, but it was a much more manageable level. Having seen how the set and people worked the night before helped a lot. Doing this was still way outside of my box, not just my comfort zone. I was trying to explain later that night to Scott and Lesli why. I used the word “shy” and only later realized it was the wrong word. “Reserved” would have fit much better. Once I get to know people, know the boundaries, know the personal space and such, I can be a bit… well, crazy… but in a good way so my friends say 😀

So from 6:45 to 8am or so, I chatted with my posse ( <3 you ladies!! ), did some twittering and FB, and then dosed on and off until 10:45 or so when I got and showered and dressed. I was lounging on the bed flipping through my “Wish Book” (aka Quadratec’s Jeep Wrangler catalogue) when Scott poked his head in letting me know he and Lesli were up. So I went into the livingroom, had a nice cup of my mint tea while I flipped through the catalogue and chatted online some more while they got ready. I think we left around 12:30. Yes it was past call time. No it didn’t matter cause they were still working on another scene 🙂

We went into the kitchen and met up with the 3 awesome makeup & effects ladies. Sadly I only remember Angie’s name but they were all awesome. Angie however was a RIOT! So freaking funny. Very outspoken. Truly memorable lady and in a good way. Zoe, another actress in one of the scenes I was in, came in as well. Another lovely young lady whom I’m very sad that did not get contact information from before she left. So we all stood around chatting. Tried a piece of turkey bacon… kinda sacrilege cause bacon isn’t bacon unless it’s from a pig, LOL! Tasted pretty good but my stomach wasn’t having any of it so I stopped at one piece. And some how we started talking about The Love Boat which Scott and had been talking about earlier at the house. Then Lesli starts talking about this episode she did of this show (she couldn’t remember the name of it) with Rick Springfield where he’s a PI who surfs. And as she’s describing it, I’m all “OH! High Tide!” Apparently, I was the only fan of the show in the room cause the fact I know the show amused everyone 😀 In my defense though, I have been a fan of Rick’s since I was like 5-6. And while I remember the show as a whole, I don’t really remember any of the specific episodes, including, sadly, the one Lesli was in. After some more laughing and joking, it was time to get down to business… makeup!

I am a tomboy. I can probably count on my hands the number of times I have worn makeup. And then it was very light makeup. Never lasted long because I would always rub it off. Well makeup for film is much heavier, I guess is the right word, to make is stand out. It was very weird having it on, especially the fake eyelashes. Have never worn those and they were always in my vision more so on my right side than left. I took a little selfie right after having it done: 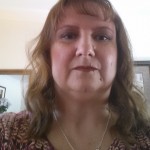 I’m still unsure about liking it or not, LOL! Pizza had arrived while makeup was being done so I wandered outside to grab a slice. Scott was out on the patio and gave his stamp of approval on the makeup as did Lesli and others. Me… I was still on the fence. I really had to pay attention and not touch/rub anywhere. Once lunch was done, I met with Lesli, Craig, and Jack to talk about the changes they had made to the scene. Again, no details but it made sense and made things easier on me and on Jack who need to focus more on acting in the scene than directing me. Good call 🙂

Then it was off to model wardrobe to see what Jack liked best. Ended up going white & grey. Jack was getting his makeup done and telling us some very cool stories. I was quite happy when all the time I spend watching things like History Channel, Discovery, and the like paid off by me being the only one who knew the significance of the color purple (not the movie but the actual color) when Jack asked. Short answer, it signifies royalty. Longer answer (which I didn’t give) is that back in Biblical times, the dye for the tyrian purple came from a sea snail so it was very expensive to get. Only those who were rich (usually royalty) could afford it. Here ends the clothing dye lesson 🙂 Oh and I might say the whole makeup process, especially when it comes to doing things like swollen eyes, broken noses, and more is very cool! Amazing what Angie and her gals could do and how real it looks even up close and personal.

Makeup done. Wardrobe approved. Now it’s to the set. It was getting close to showtime so to speak and the butterflies were a little more present but still at a manageable level. Scott, Lesli, and Jack were always there making sure I was okay, which was greatly appreciated. Following advice of S. Siobhan McCarthy, a Canadian writer, director, and producer, as well as that of my friends, I just tried to concentrate on deep breathing to keep calm, LOL!

Another well known actor and Military and Vietnam veteran, Frank Jones, was shooting with us. He was a character! Funny and quick witted. Super nice. Most of my dialog was actually delivered to him. Lesli was also in the scene but Scott was not. Scott’s job was… lighting. Yeah, we’ll leave it at that for the moment 🙂

Once again, no details as to the dialog or actions really. After a few takes, I started to get in the groove, get the hang of what I was supposed to be doing. I tried to follow the directions given by both Jack and the camera guys. Move here, don’t do this, do that, think of this when you deliver that line. Hopefully I was able to follow their leads.

There were definitely moments of levity during the filming which went from about 5pm until 2am. Many of those provided by Scott and his “wood”, LOL! A long branch he was using for the lighting effects in the scene. Hence the running joke between him and Lesli (because she was just supposed to be helping and yet was now in the scene and he was the one that was helping) with him saying “Honey, remember that time I was in that movie and asked you to help?” At some point I remember either playfully smacking or elbowing Scott for some reason, LOL! During the first scene, I was usually standing within arm’s length of him. Then of course I totally stepped into one joke as he was swinging the stick under the cord for the light and I said “Watch where you point that thing. It’s loaded.” To which he appropriately replied: “That’s what she said.” 😀

It was a fairly small space for the number of people there. If I remember right, there were 12 people: myself, Scott, Lesli, Anthony, Craig, Jack, Frank, Zoe, Stephan (not sure if that’s how he spells it – he was the cameraman who was in underwater demolitions in the French Navy), the other cameraman, Ed (the sound guy), and one other whose name escapes me sadly. Plus all a chair, a large table, and miscellaneous other equipment.

By the time we got to the second scene, I think I was pretty well collected. That’s not to say my acting was great or even good. I’d settle for “not destroying the scene”. We got to see some of the stuff filmed back on the monitor. I cringed. It wasn’t so much the watching. It was the listening. Not exactly fond of my recorded voice. I will trust however the opinions of the experts who said I did good, that I sold the character. So that wrapped my and Lesli’s filming for the night. We got a nice round of applause from all and hugs goodbye. Some we would see Sunday while others, would be done shortly after we were.

We grabbed our stuff, made a quick swing by Jerry’s Deli, before heading back to let poor DaVinci out for a bathroom break 🙂 Jerry’s Deli is most yummy! Had ham and cheese sandwich with TONS of ham on it and fries. When we walked in, I was so torn as to what to do first: get out of makeup, get into comfy clothes, or eat! Did a quick photo shoot while I was still in makeup with Scott & Lesli’s Emmy. It’s a pretty hefty statue! More than what I was really expected. It was super sweet of Lesli to suggest the picture! 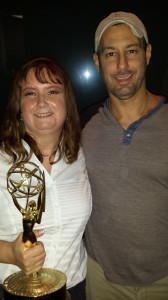 We chatted for a while, Lesli & I in the kitchen and then all three of us in the livingroom. Well 4 if you count the cuteness that is DaVinci 🙂 It was very cool just relaxing and getting to know them both and hopefully for them getting to know me some, this close to complete stranger they let crash in their home. I can’t say enough how wonderful, funny, and smart these two are. I probably could have stayed up for a lot long just chatting but Scott had scenes to film later Sunday and Lesli and I were going to be on set helping as well. So we said goodnight and went to bed.

To Be Continued Again…