I can’t blame the finding of this 2008 movie that Scott Levy has a bit part in on Val. She’s off the hook for it because it’s actually IMDB’s fault. (And the fact I was up at an ungodly hour and couldn’t go back to sleep.) No scouring of the dark recesses of the internet to find it. Just clicked on the move title and IMDB said “Hey! Look, 2 videos!”

Far be it from me to refuse the invite so I clicked and was presented with the option of watching the trailer or watching the movie on Amazon. I love Amazon so a clicking I go. Amazon loves me back by saying, “Congrats, you’re a Prime member! Watch this for free.”

Nice! Free is good when you’re not sure just how much of who you’re looking for is in the film. Another click and away I go!

I can’t call this a review though. A review would imply I watched the whole thing. I confess, I did not. I stopped around 54 minutes into the film, probably 10 seconds after Scott’s brief appearance. The movie could be effective re-titled as “The Poor Man’s Iron Man”. You have your slightly off kilter but well meaning scientist, who is no where near as cute and charming as Tony Stark. There’s also the poor, unwitting college lab assistant turn lab rat by the scientist. And no movie would be complete without the completely deranged and evil corporate baddie. Basic movie premise: scientist creates super helmet. Scientist permanently attaches super helmet to lab rat boy. Baddie wants helmet. Baddie’s henchmen kill scientist. Baddie sends henchmen after Lab rat boy. Lab rat boy is then left to figure everything out with the help of hologram scientist.

Now I’m sure you’re wondering just what part Scott plays in this. Well, as Metal (Lab Rat Boy) Man, is leaving his house, hark! He hears a scream. Around the corner is a damsel in distress. Leon (the role Scott is credited with) and his buddy are attacking a her. I like bad guys 🙂 Well movie/TV bad guys anyway. When “bad” seems so not part of the actor’s real nature,  it’s great to see them play that part and play it well. Granted, 30 seconds or so is a quick trip down bad guy lane, but if at any point in that time the viewer takes a step back and says “Yikes!”, I say job well done. For me, yikes wasn’t the physical attack on the girl, but the snarling of the “you’re gonna give us what we want, baby” and “hold her down” lines. Well snarled words send the bad shivers down my spine.

Leon’s fun is interrupted by Metal Man. Now Leon’s partner seems quite taken aback by some guy in the metal suit showing up. Leon, however, is unfazed by the tin man himself, just pissed that someone spoiled his fun for the day. His plans to use his knife to open up the tin man are, well, not successful. He gets pummeled. Such is the life of the bad guy.

On a wardrobe note, I really like the shirt Leon wears. Black, skull on the front, flames running down the sleeves. I’ll take one 😀

My record for the shortest viewing time of a movie is 20 minutes. So anything longer than that can be classified as “not that bad”. That’s where this movie ends up. I can guess at the ending. Metal Man stops Baddie from getting the helmet, saves the girl, and lives happily ever after to keep fighting crime. Leon, meanwhile, limps away to lick his wounds and massage his bruised ego 😉

I managed some screen caps. Not the greatest and I totally apologize for that but, it’s pretty much impossible to go frame by frame with internet video to get good captures. 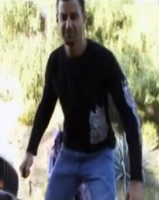 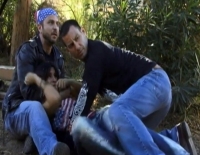 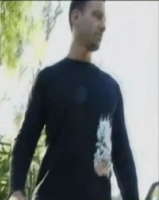 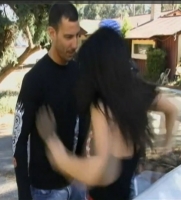 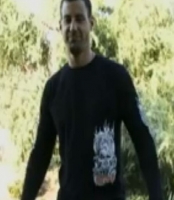 One thought on “Metal Man – Tidbits”