“The Helix… Loaded” (available on YouTube at the moment) isn’t just a Matrix parody. It’s a little more like a Keanu Reeves ice cream sundae  with a topping of movie injoke sprinkles. You’ll find references from his real breakout role of Ted in “Bill and Ted’s Excellent Adventure” (love the movie!) to “Point Break” with Patrick Swayze (RIP) and Speed with Sandra Bullock. Throw in references to Alice in Wonder, Space Odyssey, Godfather, Scarface, and probably a dozen others and nothing is safe or sacred in this movie. That’s part of what makes it so fun. I need to watch it again because I know I missed some because I was too busy laughing at others. Make sure you watch the credits. The bloopers are awesome!

The movie opened at Grauman’s Chinese Theater in March of 2005. I found a video someone did of the red carpet premiere. The filmmaker talked to just about all of the stars and at the end you get a little glimpse of Scott Levy (with longer hair!). No movie would be complete without a theatrical trailer. It looks so serious, too… at the beginning.

It is Rated R for violence, language, and gratuitous T&A. Yet again (see my House of the Dead II review), I must ask… how about some gratuitous A&P for the women?? I mean Abs and Pecs! Get your minds out of the gutter, people. We get a little bit of Theo, which is lovely in its own right but I’m sure an appropriately spoofed shower scene from Psycho with Nuvo could have been worked in there. Couldn’t it? 😉

Helix stars Scott Levy (as Nuvo), iconic 90’s rapper Vanilla Ice aka Robert Van Winkle (as Theo) and a cast of characters searching for a prize drug called “The Helix”. The Helix will provide true enlightenment to whoever takes it. Infinity, who works for Orphium, tells Nuvo that “The One” has died and among them is  “The Other One”. It is only the chosen “Other One” who will be able to take the real prize, The Double Helix. Soon though, their search has drawn the attention of The Agents and Federales.They too are searching for The Helix and it’s creator, Orpheum. The Helix and enlightenment must not fall into the hands of people.

Our band of heroes must now stay ahead of the “law” to keep Orpheum safe. When they fail and Orpheum is captured by the Agents, Nuvo must rally his friends to turn their quest for enlightenment into a quest to save Orpheum, defeat the Agents, and find out who is the mysterious “Other One”.

The whole cast did a great job! The fact that they play characters that are just complete mockeries of other characters or stereotypes and do it with seriousness adds to the hysterical nature of the parody. I cannot even begin to describe the comedy here. I think the fact they cast Vanilla Ice as the token drug dealer in the movie alone shows the humor the writer/director A. Raven Cruz had.

Here are a few of the characters’ quirks:

Tyrone (played by Moe Irvin) spent most of the movie worried that as the token black guy he was going to get shot. Okay, he had good reason. Because he did at the end. He is saved after a little groping by Nuvo and his companions’ belief in faeries (or fairies – take your pick on the spelling and definition).

Ping (Eugene Kim) is the town druggie who likes lollipops and develops an affinity toward rabbit people. He’s constantly high because he turns green when he’s sober. Or should I say turns a into an green, angry man. Don’t make me sober… you won’t like me when I’m sober!

I wasn’t too keen on Swatch (Bridgett Fink) at first. I did collect a lot of them in high school though, the watches I mean. By the end of the movie, she kicked some serious ass though!

Infinity (Samantha Brooke) just kicked ass from the beginning. (Almost) leaping across tall buildings, whacking bad guys with their own appendages, and sleeping with the entire town (much to Nuvo’s dismay) highlight just a few of her many skills. Or is it “his” skills? Haven’t figured that storyline out yet.

With most (but not all) movies I see, there is someone in it who’s work I like. Scott Levy (playing Nuvo) happens to be that person in this obscure little flick. I swear Scott had to have been channelling Keanu Reeves because his body language and facial expressions were spot on. But the kicker for me was the voice. If I had just heard him talking, I would have sworn it was Keanu. He perfectly nailed it. I don’t know if he spent hours watching “Bill & Ted” and “The Matrix” repeatedly, but whoa! Whatever he did, it worked. What also worked… so very, very well (watch the floor, it’s a little slippery)… the long black trench coat over the black clothes, the black boots, and the sunglasses. Comes very close to making up for no shower scene. Clothing aside, he has the charisma and screen presence to stand out among the large number of cast in this film.

So, Hollywood get your shit together and give this man a TV series or motion picture! Pair him up with Ed Quinn and I’ll give you cookie. Or at least quit bitching. If you need ideas, I’ve got ’em. If you need a spec script, it’s been awhile, but I can do one of those too. Just. Do. SOMETHING! 🙂

As usual, you can find other tidbits about awesome guy on my Scott Levy Archive Page.

I don’t feel I’ve really done justice to the movie with the review. The comedy of this movie does not translate well to the written word. So, just go watch it. Laugh. Get enlightened!

If you don’t feel like heading straight to the video, here are some Nuvo-heavy screen captures from the film: 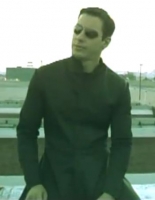 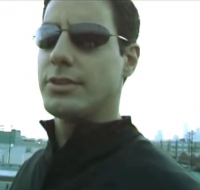 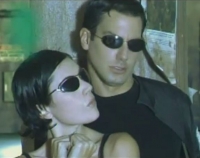 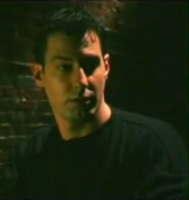 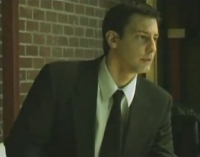 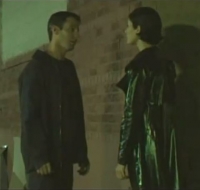 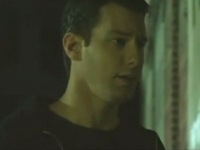 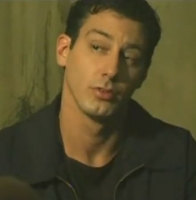 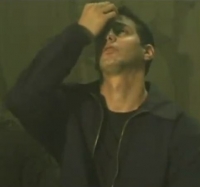 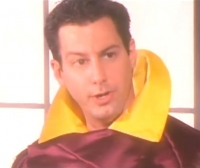 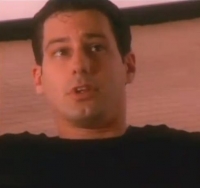 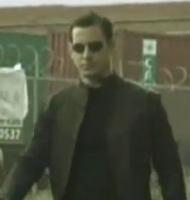 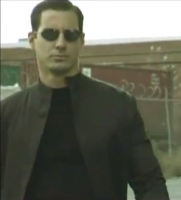 2 thoughts on “The Helix… Loaded – Review”