Before I get into the review, allow me to share a little anecdote that is related to this short zombie movie. I came home from work and horse duty (or doo-ty in most cases 😉 ) excited to get to see Scott Levy in a movie. He’s done a lot of short films and stuff that is not easy to come by, so thank you, Scott for letting Val and I see this! I made dinner. Not sure what I was thinking there. Zombies and eating normally don’t mix. My only saving grace was that I didn’t have spaghetti. I settle into my chair and get ready to enjoy the film. And I did! More on that in a bit. After watching, Val and I start chatting about it because she’s just finished watching too. Not 10 minutes later, the power at my house goes out. I freeze. There’s a little voice in the back of head whispering “Zzzzzombies… zzzzzzombies are coming!” I know that’s totally irrational but sometimes that little voice just bitch-slaps everyone else and takes over. I do fight back the urge to check outside for any undead hordes. I throw a backpack together and head over to my brother’s house, where not one person is the least bit concerned that there is a zombie apocalypse going on in my neighborhood! How rude! Even ruder was the fact everyone else got power back a couple hours later BUT my little neck of the woods. Apparently, the zombie hordes here were a little harder to fight off.

The movie is set in 2018. The zombies have overrun the USA. San Francisco is the last hold out against them. In order for the city to survive, small bands of militia are sent out on patrol looking for food and supplies. These become known as Hell Patrols. Our Hell Patrol starts out with 6 people. Maj. Karl Brickhaus (played by James Hiser) leads the ragtag band. Right off you know the guy’s an ass.  Not much humanity in the guy and we see why later.

Second in command is Lt. Sandy Fisher (Pisha Warden), the only female in the group. Tough but has that feminine touch when it’s needed. She watched her zombie parents eat her younger sister and it’s left its mark on her. Her soul and body bare the scars.

Sandy’s boyfriend, Sgt. Mark Daniels (Scott Levy), ranks third in the chain. Brickhaus considers him the most valuable member of the squad and it’s the only thing that saves Daniels from the Major’s bullet after the Major hears him confess his distaste for the the leader.

Poor Cpl. Tobi Clark (Joe Bohn). He’d been bitten by a zombie and had started to turn before we joined the group. He was dispatched within the first few minutes of the movie by a swift machete cop to the neck courtesy of the Major.

So that leaves Cpl. George ‘Chopper’ Chopinski (Tony Grat) and Pvt. Steven McWatt (Kurt Yaeger) as the low ranking bumbling duo. McWatt more than Chopper, as this is probably his first time out on a Hell Patrol.

The group had been out on patrol and is trying to make their way back to San Francisco. They’re low on supplies, most notably, water.  Sandy offers her advice to the Major about where they should do to see out the necessities. Her hunch leads them to an abandoned farmhouse. She, Chopper, and McWatt head down to clear the house, while Brickhaus and Daniels provide cover, if needed. The only occupant of the house ends up being dead already, having shot himself. Sandy’s hunch paid off though. Lots of supplies at the farmhouse to use, except for bullets.

In the most humorous scene of the movie, Sandy happens upon “girl clothes” in one of the bedroom closets. She grabs a few dresses and takes them over to a full length mirror to see how they’d look. Unknown to her, Daniels is watching her. He clears his throat which startles her. Then Daniels does the classic open mouth, insert foot move and asks if it will fit. Sandy reminds poor Daniels that such a remark is still taboo “especially if you want to get into it later.” 🙂 The look on his face is quite funny as he deftly tries to back peddle.

Sandy quickly because discouraged though because the dress can’t hide the scar on her face or the one that she carries inside because she can’t remember what her little sister looks like. Daniels reminds her that what happened to her sister wasn’t her fault and that the team needs her. He needs her. They start kissing. But their moment of passion is cut short by the signal flare from Chopper and McWatt. The zombies have found them.

The intrepid teams climbs to the roof to fend off the zombies. This unfortunately is the weakest part of the movie for me. Sandy’s speech just didn’t seem to fit her or the situation. It was too long for one. A zombie horde is breathing down your neck. I understand the need to rally the troops, so to speak, but get to the point and get to killing before they overrun the place. There was also something about the context of it that didn’t flow well for me. Difficult to explain though. It certainly wasn’t a deal breaker for the movie though.

Unfortunately for our heroes, the zombie horde is too big. The team quickly runs out of ammo and go back downstairs to try and fortify the house. In doing so, McWatt is grabbed and dragged through a window by the zombies. Chopper freaks out when he uses his last 2 shotgun shells and beats a retreat to the roof. He too is picked off though when he’s startled by a zombie on the roof and slips off, onto the ground.

Daniels, no less lucky, gets bit on the arm and neck as the zombies reach through the boarded up windows. Sandy tells him they can still make it if they get out now. Daniels knows it’s a lost cause. He’s been bit. He will turn. He convinces her to get out and get back to San Francisco. Sandy bails out the back door while he breaks off a gas pipe in the kitchen. He prepares to light a flare that will kill himself and the zombies. (*sniff* *sob* – not for the zombies)

Sandy escape path takes her across Brickhaus. He’d been bitten and is now turning. And he’s the one that lead the horde right to them. Giving him his just reward for being such an ass, Sandy shoots him. As she gets ready to take off, the house explodes.

The last we see of Sandy, she on a cliff overlooking the Golden Gate Bridge. Knowing she is almost home, she starts the climb down the cliff.

Overall, I liked the movie.  The few things that I didn’t like were very minor in comparison. My favorite thing was just getting to see Scott in a movie, even if it was only 30 minutes long. He made his character enjoyable and not one dimensional, which can happen a lot in short films. And the fact he looks, and I quote my friend Val, “sizzlin’ ” is an added bonus!

I really, really hope we get to see more of Scott soon! He’s one of those undiscovered gems in Hollywood. Any future information I can find will be on my Scott Levy Archive page. So I will leave you with some sizzle from Scott 😉 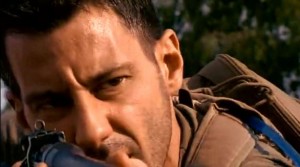 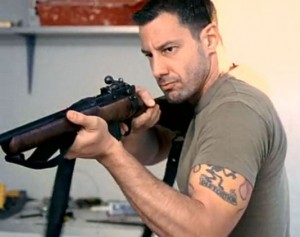 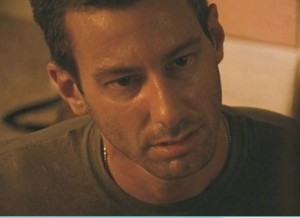 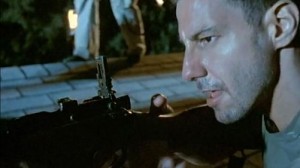 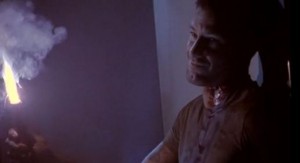 2 thoughts on “The Hell Patrol – Review”